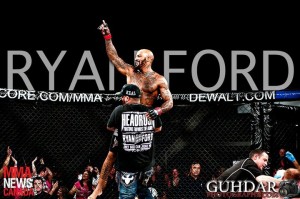 Edmonton native Ryan “The Real Deal” Ford knocked out Indiana’s Johnny Davis
in the second round in the main event of Aggression MMA’s “Punishment”, as part of the Score Fighting Series.

Ryan is one of Canada’s brightest stars in the welterweight division.  Ryan came into the weigh-ins before the fight at 170lbs feeling strong and ready to rumble.  Johnny Davis, on the other hand, came in at 176lbs (6 pounds overweight), which to me is a slap in the face.

Well Ryan delivered that slap in the face with a serious second round knockout. 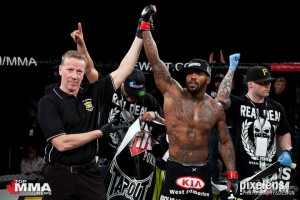 Weeks before this fight, Ryan emailed me to get some guidance for his nutrition leading up to this fight, so I delivered with a nutrition plan, similar to the one that worked for me preparing for my fight.  Ryan told me he felt great and watching the fight myself, he “rag dolled” a guy that came in much heavier.

Congrats on the big win Ryan!