This is a conditioning circuit I did with Ainsley Robinson (former Olympic Wrestler) in preparation for his Bellator 76 fight October 12th in Windsor, ON

See below the video and description for breakdown of the workout, exercises and their benefits.

Perform each exercise one after the other for 60 seconds each followed by 15 seconds rest/transition time. Complete as many reps as you can for each interval

After you complete all 10 exercises or one round in succession you will rest for 2 minutes and complete 3 full rounds. 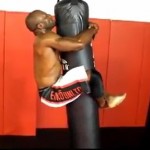 1. Front Loaded Goblet Squat and Alternate Lunge – This exercise is great to build lower body power and strength. We added load to this exercise by having Ainsley hold the kettlebell by the handles. This adds more of a front load and which puts more emphasis on the quads. When performing squats it’s “ass to the ground”. Get as low as possible. We used 30lbs kettlebell

2. Med Ball Side Rotation Throws (not shown) – This is a partner drill. I tossed the medicine ball to alternating sides and Ainsley stood in fighter’s stance, while catching and then throwing the ball back to me. The key is focusing on rotation, stability and core strength. We used 16lbs medicine ball

3. Resistance Band Snap Downs – Great pull exercise to build explosiveness, muscular endurance, balance and conditioning. We used the resistance band drills to perform the explosive motion that generates from the back and core. During the exercise Ainsley may have stepped back a little too far, hence the snap. His high intensity and power caused this.

4. Side to Side Plyo Skaters – This is a fantastic lower body plyometric exercise that targets your glutes, quads and explosive jump. I had Ainsley start off getting low and really exploding up and over using his glute muscles and leg. As we progressed to the final 20 seconds, I had him speed up to simulate the speed at which you should always end your rounds.

5. Bosu Ball Explosive Plank to Push Up – This exercise is a killer for upper body explosiveness, muscular endurance and core strength. As you fatigue through this movement you must focus on keeping the core tight and channeling your mind to EXPLODE through each rep. 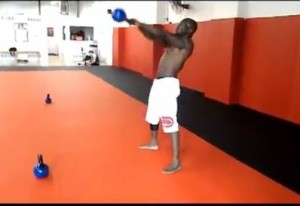 6. Kettlebell Swings – This exercise should be a staple in every MMA athletes training. It develops explosive lower body power, strengthens the core, increase your cardio and conditioning and burn fat. In most of my circuits you will see some variation of the swing but the two-arm swing is the basic one. I made sure to have Ainsley focus on the lower body doing the work and squeezing the glutes at the top of the movement. 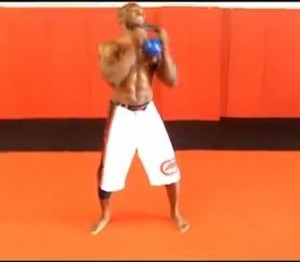 7. Kettlebell Alternate Side Pass and Shoulder Press – This exercise is often overlooked, but extremely effective for upper body and core strength, punching power and muscular endurance. The focus is mimic the lower body movement of a punch by pivoting your feet and rotating the body as you punch/punch outward

8. Roll Back and Sprawl – This was a tough exercise, especially near the end of this circuit. The movement has you roll back and then explode into a sprawl and quickly back to the roll. This works on your strength, power, endurance, agility and balance. Core strength, lower body explosion is targeted, but your entire body is needed. 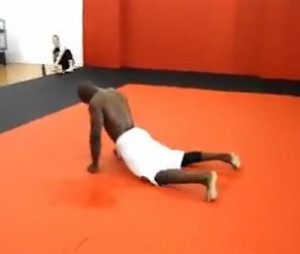 9. Alternate Side Planks – The Side Plank Reach Under is one of my favourite exercises to build strength and tighten your oblique muscles. The Side Plank Reach Under was a key exercise I used to develop core strength, along with better truck rotation and flexibility. Another must do exercise for MMA fighters as it works on the rotation and twisting you will need for developing punching. You also want to build strength to absorb punches.

10. Isometric Heavy Bag Hold with Resistance – Isometric strength is required especially when grappling and holding the same position for long periods of time can be very difficult. Adding isometric moves to your training is a must. The Heavy bag hold is great. During this interval, while Ainsley was holding onto the bag, I was punching and kicking him, pushing the bag, pushing down on his bag and trying to loosen his grip. The goal was to have Ainsley to hang on for 60 seconds simulating being on a fighters back and trying to keep position.