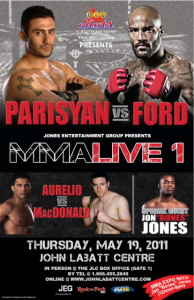 I am so happy to announce that Ryan Ford passed one of the biggest tests of his MMA Career by defeating UFC and MMA vet Karo Parisyan in London, Ontario last night.

The fight by no way was easy and some say Karo was winning going into the 3rd round.  Ryan’s knee to the head in the 3rd round forced the ringside physician to call the fight giving Ford the victory via TKO.

But it’s that never say die attitude and belief in yourself that makes true champions and he definitely showcased that last night.

Ryan has used my FunkMMA Nutrition Plan to help prepare for his fights.  Ryan’s next fight is June 10 at the Shaw Conference Centre against Nick Hinchliffe.

Personally I think Ford is one of the best Welterweight’s in Canada if not in the sport.

Check out the fight video and write up from YouTube/Cagepotato.com

If there was any question as to whether or not Karo Parisyan has turned a corner from his highly publicized battle with anxiety and painkiller abuse, he answered it with his showing against Ryan Ford at MMA Live 1in London, Ontario Canada Thursday night.

Logging what was arguably his best performance of the past three years, Parisyan took the two opening rounds of the bout utilizing his flashy judo and ground control and was looking good in the opening minute of the third when Ford connected with a stiff knee to the crown of the Armenian judoka that opened up a nasty cut and left the mat soaked in blood. When Parisyan slipped in the puddle of blood, veteran referee Yves Lavigne called in the ringside physician who, after a few moments of deliberation, called the fight off, giving Ford the win via TKO at 1:26 of round 3.

Parisyan’s wound was as deep as his skull, but still he walked out of the cage with his head held high having accomplished his goal of “just going out there and proving to myself and to my fans that I’m back.”

We will have exclusive interviews with both Karo and Ryan up soon, but in the meantime check out rounds two and three below.