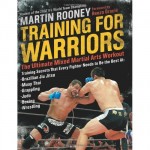 I am so pumped to bring you one of my all-time favourite and one of the world’s best MMA strength and conditioning trainers, Martin Rooney.  Martin trains UFC Lightweight Champion Frankie Edgar, along with Jim and Dan Miller, Forrest Griffin, Wanderlei Silva, Ricardo Almeida, Roger Gracie, Dante Rivera, and Rolles Gracie just to name a few…you can see why I love this guy!

Martin is also the author of one of the most famous Strength and Conditioning books on the market, Training for Warriors.

It’s a must buy for anyone that wants to take their fitness to the next level.  In the inaugural post to FunkMMA,  Martin will be showing his popular Barbell Complex Workout.  Angela and I are actually going to try this workout tomorrow.

Here is Martin Rooney and Igor Gracie going through the bar complex. This is an exercise series from the Training for Warriors book. See how the forearms feel after this workout

2. Behind the neck presses 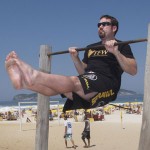 Martin Rooney is a Performance Enhancement Specialist with Master of Health Science and Bachelor of Physical Therapy degrees from the Medical University of South Carolina. He also holds a Bachelor of Arts in Exercise Science from Furman University.

Martin is a licensed Physical Therapist in NJ, a Certified Strength and Conditioning Specialist under NSCA and a Certified Personal Trainer under NASM. He has also been certified in Active Release Technique for the upper extremity and certified in the lower extremity by the Institute of Flexibility Sciences. He also currently writes for the Elite Fitness Systems Website and is a fitness columnist on the editorial counsel for Brazil’s Gracie Magazine. 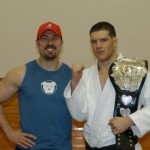 Martin was a member of the United States Bobsled team from 1995-1997, 2000 and a four-time All Conference, MVP performer in Track and Field at Furman. Martin currently trains in both Brazilian Jiu Jitsu with Team Renzo Gracie and Kodokan Judo at the prestigious New York Athletic Club.

Martin has lectured for Perform Better, the American College of Sports Medicine, the College Strength and Conditioning Coaches Association, the National Strength and Conditioning Association, and has been commissioned by Nike to run speed testing camps at a number of major universities. Martin has been featured on ESPN, Sports New York, Fox Sports Net, the NFL Network, NBC.com and in the New York Times, The Sporting News, Stack Magazine, Sports Illustrated for Kids and Outside Magazine. He has written two training texts called “Train to Win” and “Training for Warriors”, and also coauthored two other books on the forty yard dash and the vertical jump. Martin has also produced a 10-part DVD series on the Parisi Training Method.

He has also traveled as far as Brazil, Japan and the Middle East to conduct seminars and help prepare world class fighters for competitions such as Pride, the UFC and the Abu Dhabi World Submission Grappling Championships.

Currently, Martin is the director of the Parisi Speed School. The Parisi Speed School is launching its national and world franchise opportunity under Martin’s leadership and there are already 29 franchises in 20 states across the United States sold in addition to 5 company owned stores in New Jersey.

In addition to training many world champion martial artists, Martin has also been a speed and conditioning consultant to the New York Giants, New York Jets, Cincinnati Bengals, Arizona State University, Montana State University, Oregon State University, and the University of Alabama as well as other athletes from the NFL, MLB, NBA, WNBA and numerous top Division I colleges across the country. He has also trained numerous Olympians including one gold, and four silver medalists.

Over the last few years Martin has helped to develop one of the top NFL Combine training programs in the country producing the fastest athlete at the 2001, 2004, 2005 and 2006 NFL Combine and first place finishers at ten different positions, including five all-time records.

Martin lives in Fair Lawn, New Jersey with his wife, Amanda, and their two children, Sofia and Kristina.