4 Benefits of Kettlebell Training for MMA and Combat Fighters | FunkMMA

4 Benefits of Kettlebell Training for MMA and Combat Fighters

Posted on December 3, 2013 by FunkRoberts 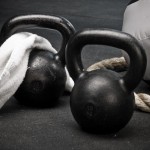 Kettlebells can be a wonderful tool for any combat fighter to use if they want to get strong, powerful, explosive and shredded. 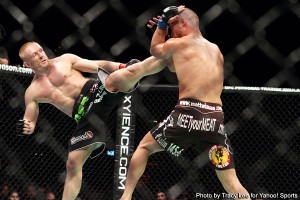 If you fight, then a lot times your success in the ring isn’t so much determined through how hard you hit, but by how many hits you can take and still deliver.

As a fighter you have to be able to absorb force. Whether that be from an incoming punch or kick or from a guy barreling himself into you, you’ve got to be able to take the hit (or avoid it).

This holds true with team sports like hockey, lacrosse, rugby and especially (American) football as well.

So being able to build upper body armour that’s able to the withstand impact is important.

How do you do that?

This is great for both conditioning and packing on some impressive muscle.

2) Being able to control & resist momentum.

Think about the first time you tried to swing heavy double kettlebells. 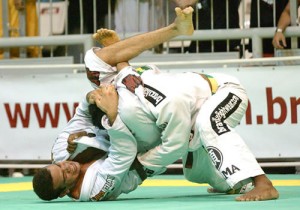 Do you remember those KBs “throwing” you forward because you were unaware of the force and momentum they created?

Sure they were probably only a percentage of your bodyweight, but when you take into account the speed at which you are moving them, well, the “physics” change and they become much heavier.

So to be able to accommodate for the added weight, you had to make sure that you were properly routed into the ground and understand how much you’d have to counterbalance that weight with your bodyweight so wouldn’t get thrown.

You’re resisting and overcoming the momentum created by the accelerated kettlebells.

This isn’t any different from an opponent trying to throw you or spin you while you’re in the clinch.

What makes a punch hurt?

When someone delivers a hit, their entire body must tense on contact to be able to make the blow impactful. Otherwise you get a soft hit or worse, a broken hand.

Now think about swinging a single kettlebell with one arm. When you swing, you direct your force to the horizon through the kettlebell.

At the peak of your swing, your entire body is tense – feet rooted, quads, glutes & abs contracted and a strong fist gripping the kettlebell.

This is exactly the same reaction that your body has when you deliver a punch.

Immediately following the hit, your joints go soft and you go back into a state of relaxation the same way your glutes & quads have to relax when you hike-pass the kettlebell through your knees on the back swing.

Kettlebell ballistics are all about mastering & managing the relationship between tension & relaxation. If you’re always tense, then you’ll gas out pretty quickly.

Conversely, if you’re relaxed when you swing (or punch), then your ability to produce force is diminished and you leak energy.

4) The ability to manipulate your body under load. 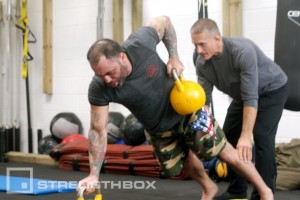 Grappling and Jiu Jitsu are 2 awesome arts that fighters better have some knowledge in if they expect to be successful. Case in point, if you saw the Gustafsson vs Jones fight, Gustafsson continued to avoid Jon Jones trying to take the fight “to the mat”.

Gustafsson knew that Jones was a former collegiate wrestler so he possesses far greater skill on the mat than the former Swedish boxing champ.

So Gustafsson avoided Jones’ attempts at taking him down because he’d be at a complete disadvantage.

Had Jones taken him down, Gustafsson would have had to try to manage the skillful wrestling of Jones while on his back maneuvering his body with Jones over top of him to avoid getting into a submission hold.

This maneuvering can be likened to doing heavy get-ups or even a bent press where you must master body movement while maintaining load over top of you.

So with all that being said, try this double kettlebell complex today for your training and train like I would train a fighter…

1) Heavy Get-Up Singles using your pressing weight or one above. Do single reps, alternating sides, and try to get as many reps in as you can in 10 minutes.

Then, grab a pair of doubles (pressing size or heavier) and perform ballistics…

Do the ballistics for 10 minutes doing the superset “on the minute”. So perform the exercises at the top of each minute and then rest for the remainder of the time.

Give it a shot and let me know what you think. 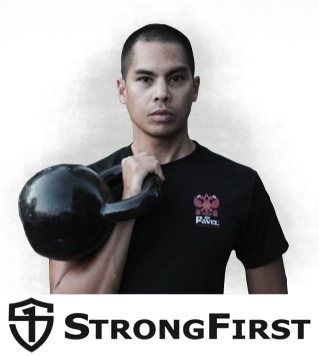 If you recall back to your grade school days…

Playing out in the school yard, there was that one fat kid, who, when the recess bell rang and everyone had to get back to class, always ended up last in line, out of breath, sweat pouring down his forehead from the 40 foot sprint from the sandbox to the classroom door.

That was Chris Lopez.

Now, fast forward almost 30 years and Chris is one of the most sought after experts in the field of kettlebell fat loss training.

Chris is a 13 year veteran in the fitness and strength & conditioning field getting certified as a personal trainer while completing his Bachelor of Science Degree in Human Kinetics from the University of Guelph back in 2000.

He is now an NSCA Certified Strength & Conditioning Specialist, The 1st Certified Turbulence Trainer and now a Master Trainer with Turbulence Training and one of only two Level 2 StrongFirst Girya (SFG2) Kettlebell Instructors in all of Canada.

These days, Chris can be found in various downtown espresso shops, listening to ‘90s hip hop in the park while training with kettlebells or with his wife carting their 5 kids around on his Opafiets (dutch for “Grandpa bike”) through the streets of downtown Toronto.

You can also find Chris on the internet at KettlebellWorkouts.com and writing for his personal blog at FitAndBusyDad.com .

If it wasn’t for the days when his mom would purposely “sauce up” the rice on his dinner plate with bacon fat to make him “healthier”, Chris probably wouldn’t have the drive today to want to get anyone in shape – let alone himself.